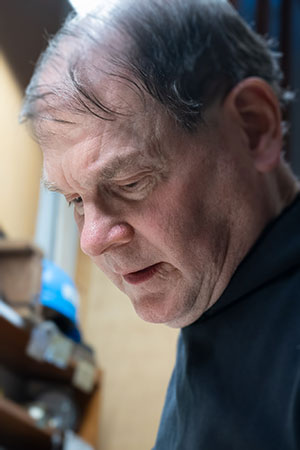 Stephen Paul Kowalyshyn, born of German and Ukrainian ancestry, grew up in Pennsylvania and Maryland. Having graduated with a degree in organ performance from Peabody Conservatory, Baltimore, under Arthur Howes, he began his apprenticeship in organ building with Charles Fisk in 1972. Charles had built his opus 35 for Mt. Calvary Church at Howes’ request—it was the Conservatory students’ chief recital instrument and the one on which Stephen played his senior recital. At Fisk Stephen has been involved in every aspect of the organ builder’s art, many for several years’ duration: woodworking and cabinet making, keyboard making, action making and adjusting, pipe making, flue pipe voicing, reed pipe voicing, tonal design and finishing, and, mostly for his own diversion, 3D CAD design of small pipe organs. His contributions to the technical and tonal sides of the Fisk organ since Charles’ death have helped maintain the leadership of C. B. Fisk, Inc. in the organbuilding world. He continues working as senior voicer, occasionally assisting with the tonal finishing of Fisk instruments. For many years Stephen was also organist and choirmaster and professional chorister in several Maryland and Massachusetts churches.