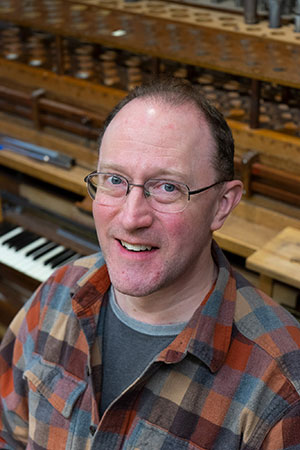 Carl Klein met many of the Fisk team in 1994 when Opus 105 was installed at St. Andrews Episcopal Church in Tampa where he was Director of Music at the time. Twenty years later, after a career of 35 years playing the organ for church and concerts, he joined the firm to build. His usual tasks at the shop include the making of reeds, the preparation, shop voicing, and tonal finishing of both flues and reeds, and duties as shop archivist.

Carl’s formal education in organ performance was at the Eastman School of Music of the University of Rochester (DMA 1991; MM 1988), and before that at Mansfield University of Pennsylvania (BM and K-12 Teaching Certificate 1986). Dr. Klein has been an organist/choirmaster in the Episcopal Church for over 30 years and currently serves at the Parish of the Good Shepherd in Waban, MA. He maintains membership in the Association of Anglican Musicians and in the American Guild of Organists, and is administrator of the Boston AGO Organ Library and Archive.