Charles Fisk began initial discussions with Frances Conover Fitch, Director of Music, in 1983.  He wrote: “The side position for an organ is seldom thought of as ideal, yet St. John’s is so narrow and so moderate in cubic volume that a well built and well voiced organ should carry easily to the extremities of the building, particularly if an effort is made to get the organ unobtrusively ‘out of the hole’ it now occupies.” The contract was signed in 1984, shortly after his death, and the organ, completed in 1989, exists much as he originally envisioned.

The lofty and overhanging Oberwerk is the primary hymn playing division and contains the Principal chorus and the colorful Sesquialtera.  Behind the reversed detached console the comparatively large Swell is housed in a heavily constructed box capable of wide dynamic effects.  The lush unison stops and colorful reed stops contribute subtle effects, making this an ideal division for accompanying choirs and instrumentalists.  The Pedal contains an independent wooden 16′ Bourdon, which forms the façade of the lower case and a full-length 16′ Posaune standing just behind the Swell.

Charles Nazarian designed the quartered white oak case, which preserves some details from the original Estey organ, and complements the nearby reredos, designed by Gothic Revival architect Ralph Adams Cram. 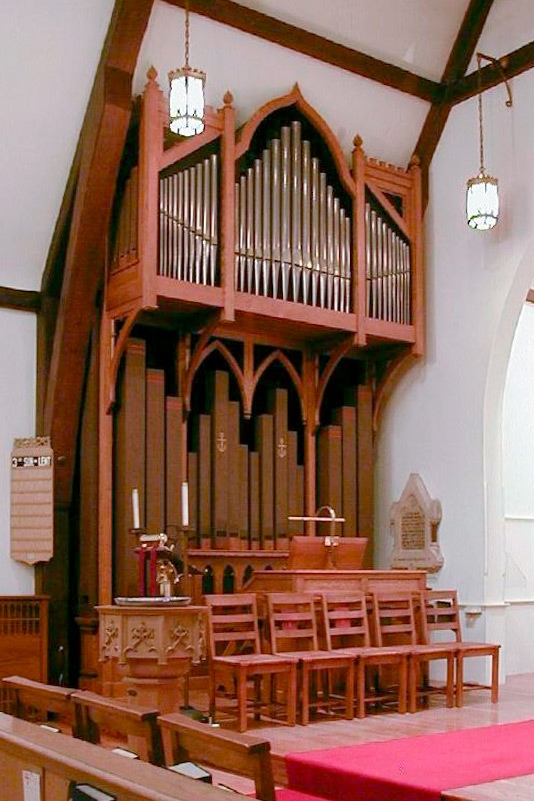 Oberwerk & Swell keyboards, CC-g3, 56 notes, flat Pedalboard, CC-f1, 30 notes.
* denotes pipes from previous Estey organ rebuilt and revoiced.
Swell & Pedal Trumpet alternates between divisions, it will appear in both places when drawn on the Swell, and with the Swell to Pedal Coupler.
Gambe & Celeste, Sesquiatera, Trumpet & Posaune added in 1997.
Bracketed pair of stops, drawing the knob half way brings on the first stop and drawing the knob the full way brings on the second stop.