At three manuals and forty-five stops, Opus 91 was by far the largest instrument we had ever created for a private home. The vision of Jacques M. Littlefield, the organ stood in a specially constructed concert hall adjacent to the Littlefield residence in Portola Valley, California. Mr. Littlefield, a Stanford University alumnus, was a major donor of Opus 85 at Memorial Church, Stanford University, a great friend, and a supporter of our work.

In contrast to the largely Germanic nature of the Stanford instrument, he desired a French inspired organ for his own, having a particular fondness for the sounds and case designs of 19th century organs of Alsace. Members of the Fisk staff made extensive study of these instruments, including a research trip to the area before the stoplist and tonal design were decided upon. A scale model of the Littlefield music room was made, as is typical of our design process, and the visual design created in 3-D, in the model, with reference to the fruits of our historical research. The intricate curved panels, immense lathe-turned tower moldings, and the matchless walnut carvings of Morgan Faulds Pike make it some of the most challenging woodworking ever accomplished by our firm.

When Mr. Littlefield died in 2009 we were asked to find a suitable new home for the organ and were very pleased when Indiana University expressed interest in acquiring it.  The organ was removed from Portola Valley in early 2012 and stored awaiting modifications to Alumni Hall in the Memorial Union on the Bloomington campus. When the organ was installed in 2013 it became the third Fisk instrument at the Jacobs School of Music joining Opus 135 in Auer Hall, and Opus 142, a practice organ in the Music Building. 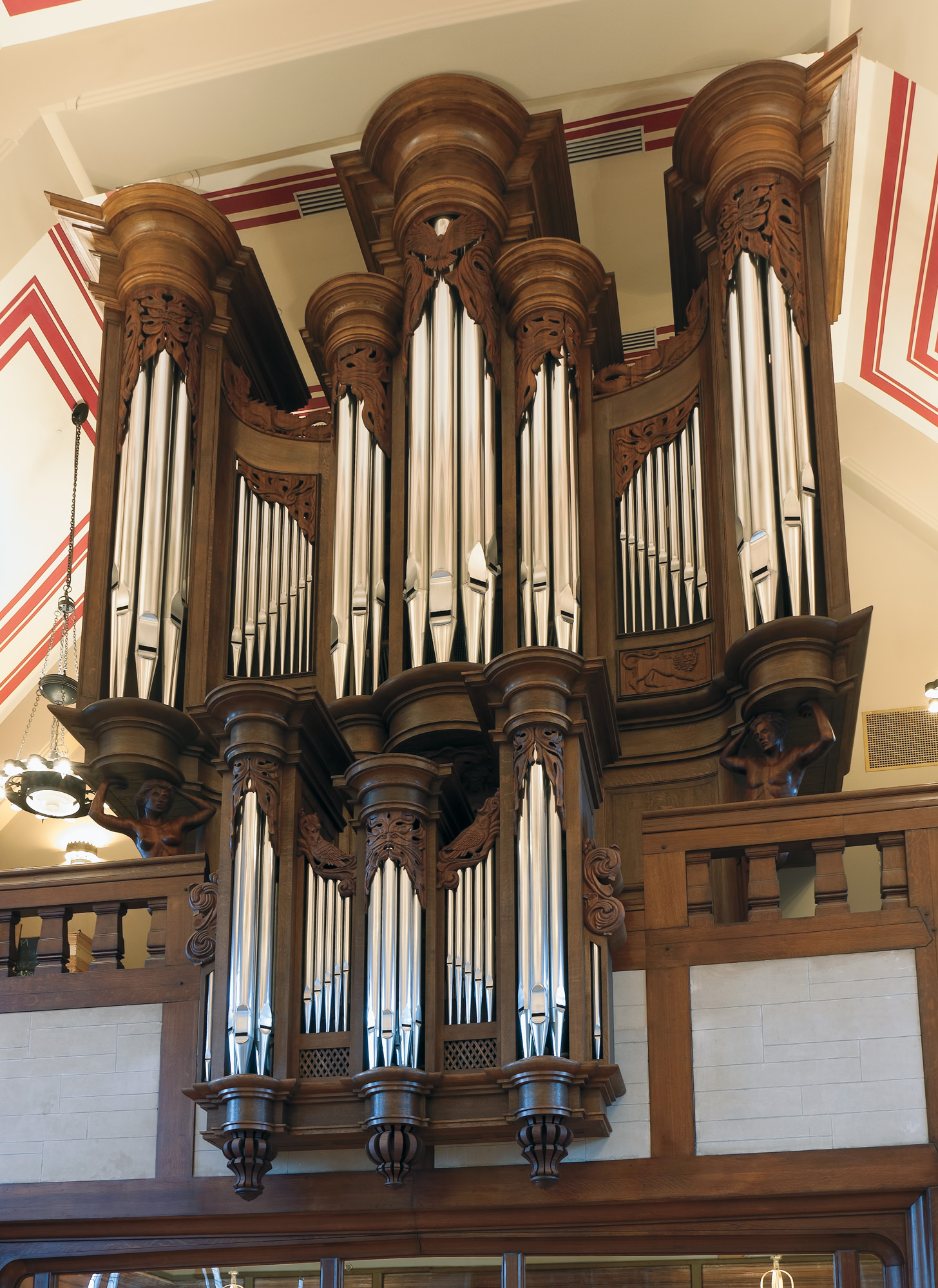 Manual keyboards, CC – a3, 58 notes, flat Pedalboard, CC-f1, 30 notes.
Bracketed pairs of stops are each controlled by a single knob. Drawing the knob halfway brings on the first stop; drawing it fully brings on the second stop.
Combination action: Two pairs of adjustable combination “on” and “off” pedals: one pair to operate stops of the left stop jamb and one pair to operate stops of the right stop jamb.
Decorated oak case, carving in walnut by Morgan Faulds Pike.