A large two-manual organ of classic design, Opus 35 was built while Charles Fisk was owner and president of Andover Organ Company. During its construction, Dirk Flentrop, the esteemed Dutch organbuilder, and Arthur Howes, organist at Mount Calvary, provided counsel and advice for this undertaking. Although originally conceived as a three-manual instrument, this concept was strongly resisted by Mr. Flentrop on the grounds that “the physical situation of the balcony will admit of a perfect two-manual, but only of an imperfect three-manual, organ.” Before the instrument was completely finished Charles moved his company to Gloucester, Massachusetts and changed its name to C. B. Fisk, Inc.

This organ was his first significant instrument and defined the direction that his work would take. Constructed with traditional mechanical key and stop action, and two mechanical combination pedals for stop assistance on the Hoovdwerk (Great), the organ’s tonal design follows the work of Gottfried Silbermann in the manual divisions while the Pedal draws from the instruments of Arp Schnitger. The tonal resources and musical characteristics of Opus 35 provide for the performance of a wide range of music from the Renaissance and Baroque to contemporary works.

The visual design is based on the late Gothic organ case in Amiens Cathedral, Amiens, France, and includes an 8′ trumpet en chamade. The ornaments, carved pipe shades, and crenellated tower tops are gilded and contribute to the traditional, yet fresh look of this landmark instrument. The vitality of this visual design can be seen in later Fisk instruments at Willimantic, Connecticut (Opus 57); Ipswich, Massachusetts (Opus 62); and Winchester, Massachusetts (Opus 65). 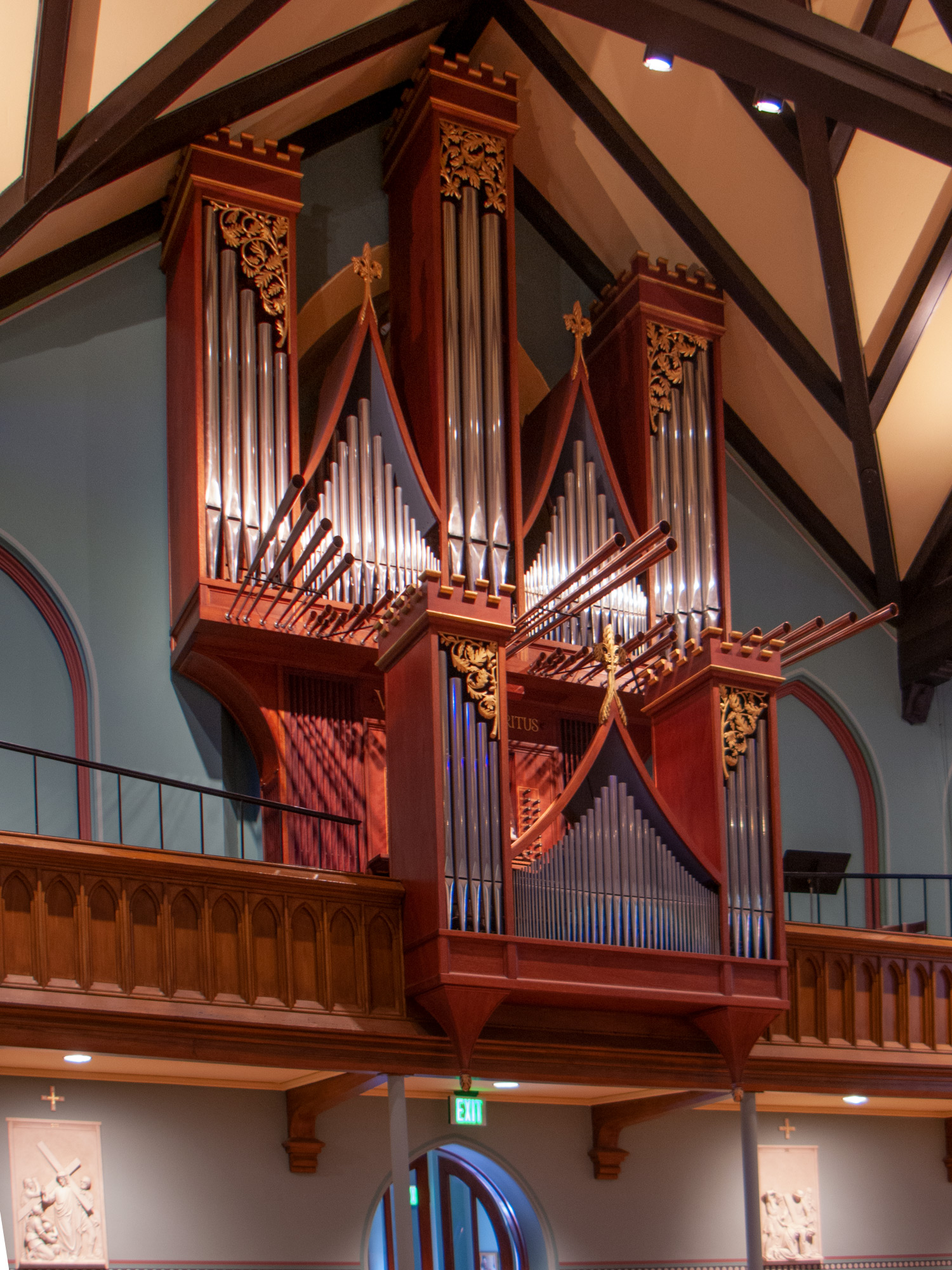 On/Off settable mechanical combination pedals for left side jamb (stop knobs of the HOOFDWERK). According to Arthur Howes, the original and only purpose of this “sort-of” combination action was to enable this two manual organ to play like the three-manual organ that Arthur earlier hoped and intended it to be. One started a piece playing a full registration on the Hoofdwerk, then moved both hands to the Rugwerk, a secondary registration, activate the OFF pedal to reduce the Hoofdwerk to a “Brustwerk” combination while still playing on the Rugwerk, then jump back to the Hoofdwerk/”Brustwerk” with its now still lesser registration. …and then the whole procedure was reversed.