On 6 March 2017, a tornado swept through downtown Muscatine, Iowa, a small industrial city on the banks of the Mississippi River. On its brief, circuitous path through town, the tornado toppled the tall masonry chimney of Wesley United Methodist Church. The chimney came crashing down onto the roof over the pipe organ chamber, demolishing Wesley’s 1983 4-manual pipe organ. Except for minor damage to one of the sanctuary’s splendid stained glass windows, virtually nothing else in the church building was touched.

As the rebuilding process began, Sally Potter, Organist at Wesley, contacted us about the possibility of our replacing the ruined organ. Following visits to our Opus 98 at First Presbyterian Church in Evansville, IN, and Opus 123 at St. Chrysostom’s Episcopal Church in Chicago, the Organ Committee was convinced that we should be their organ builder. In dialogue with Sally, specifications for a 3-manual and pedal instrument, with attached console and two divisions under expression, were developed, and a contract was signed with the church in January, 2018. Sally’s directives with regard to Opus 153’s tonal design included “efficient”, “lean and mean”, “colorful”, “some Sturm und Drang”, and “attentive to recitalists”. Muscatine is only 45 minutes from the University of Iowa, and an Organ Recital Series has been a part of the church’s outreach for generations. The new instrument must be a “destination” for concert organists from around the world.

Opus 153 is home to 40 stops, 35 of which are independent voices, and 9 of which are reeds. The two expressive divisions, Choir and Swell, are placed side-by-side at impost level and are oriented back-to-front. The Great is located above the two expression boxes, the Pedal on either side, outboard of the two boxes. We were able to salvage, rebuild, and revoice three partial ranks of wood pipes from the heap of rubble that was the former organ – the Choir Gedackt 8′ (CC-a 1 #), the Choir Flute conique 4′ (CC-G 0 #), and the Swell Quintaton 16′ (CC-AA#). Thus, a material connection to the ill-fated 1983 instrument was assured. The music program at Wesley is a collaborative effort, with the Choir conducted by Music Director Ric Smith and Sally presiding at the organ. Installation took place in April and May of 2019. The dedication festivities took place on 24 November 2019 and featured a solo recital by Nathan Laube, Professor of Organ at the Eastman School of Music. 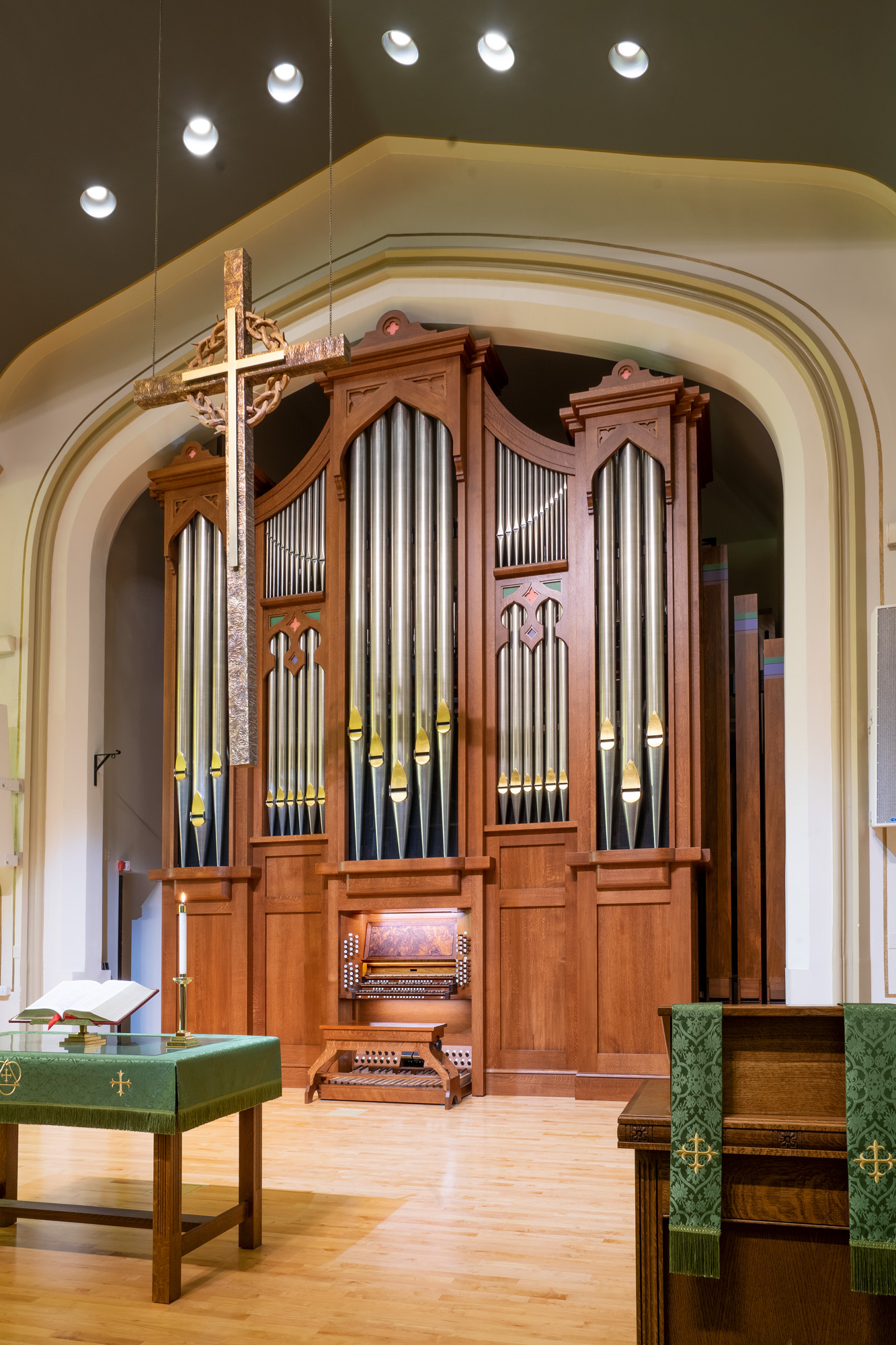