Dating to 1744, Christ Church is one of the finest Georgian structures in America and welcomes thousands of visitors every year. Known as “The Nation’s Church,” it hosted members of the Continental Congress during the American Revolution and Presidents George Washington and John Adams in the first decade of the newly established Republic. Among early members were Benjamin and Deborah Franklin, Betsy Ross, and several signers of the Declaration of Independence. Absalom Jones, the nation’s first black priest, received his ordination at Christ Church.

At the center of the wrap-around West Gallery under an elegant barrel vault ceiling stands a stunning white organ case decorated with fine carvings and a crowning, gilded starburst. The case’s history began with a pre-Revolution instrument built by Philip Feyring and continued with a distinguished organ by Henry Erben dating from 1837. It now encloses C. B. Fisk Opus 150. The new organ adds a Chaire division, designed to harmonize with the historic main case, on the gallery rail.  The 49-stop instrument comprises 3 manuals and 3,095 pipes and is of an eclectic tonal design. The pipes of the manual divisions are voiced on 2¼” of wind pressure, enabling an organ sonority of great warmth, clarity, and transparency.

The music program at Christ Church is presided over by Organist and Music Director Parker Kitterman. Dedication festivities were held in May 2018 and featured a recital by Curtis Institute Professor of Organ Alan Morrison. Opus 150 is dedicated to the memory of Esther Cupps Wideman, lifelong student of and advocate for the classical pipe organ and its literature. 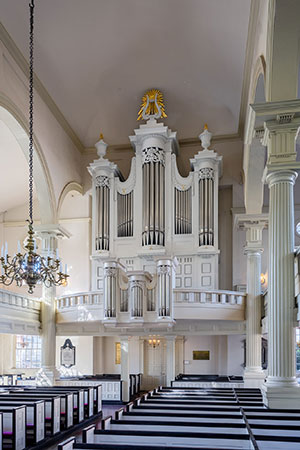 Chaire, Manual I on gallery rail