Segerstrom Center for the Arts

Designed in consultation with Pelli-Clarke-Pelli Architects, the new William J. Gillespie organ provides an impressive focal point above the stage of the concert hall at the Segerstrom Center For The Arts. The instrument distinguishes Costa Mesa as one of few cities worldwide to boast a stunning acoustical setting with a monumental pipe organ. The visual design reflects the qualities of historic instruments while harmonizing with the modern interior of the hall through the unusual use of aluminum-leafed wooden pipes in the case, in addition to pipes of high-tin alloys. While the front pipes and casework were completed ahead of schedule for the opening of the hall in 2006, the instrument itself debuted in 2008.

Opus 130 is the fourth symphony hall organ from the our firm, taking its place alongside other Fisk instruments at the Meyerson Symphony Center in Dallas, Benaroya Hall in Seattle, and Minato Mirai Concert Hall in Yokohama. The list of large modern mechanical action organs also includes the company’s magnum opus at Lausanne Cathedral in Switzerland, which serves with L’Orchestre de Chambre de Lausanne. Orange County’s organ has tonal resources vast enough and diverse enough to make a powerful musical statement in concert with the symphony orchestra. The Solo division is on higher wind pressure and is specifically suited for providing the musical climax in the repertoire for organ and orchestra. In addition, the organ is more than capable of standing on its own to showcase centuries of recital repertoire with authority.

As with all Fisk instruments, the Gillespie Concert Organ employs tracker action, affording the organist unparalleled nuance of touch. The assistance of the Kowalyshyn Servo-pneumatic Lever may be called upon to allow the player to maintain effortless control when playing several of the divisions of the instrument at the same time. The KSPL also allows for the inclusion of an Octaves graves coupler without detriment to the action. The electrically controlled slider stop action includes a modern solid-state combination action for pre-set registrations, multiple levels of memory and a sequencer. The organ is winded by electric blowers totaling 12.6 horsepower, providing pressures from 4″ to 25″ water column. The organ case stands 45 feet tall, and is 35 feet wide and 12 feet deep. The case and front pipes, extending down to 32′ CC, required almost 3,000 square feet of aluminum leaf. With its 4,322 pipes made of both wood and alloys of lead and tin the completed instrument weighs 20 tons. 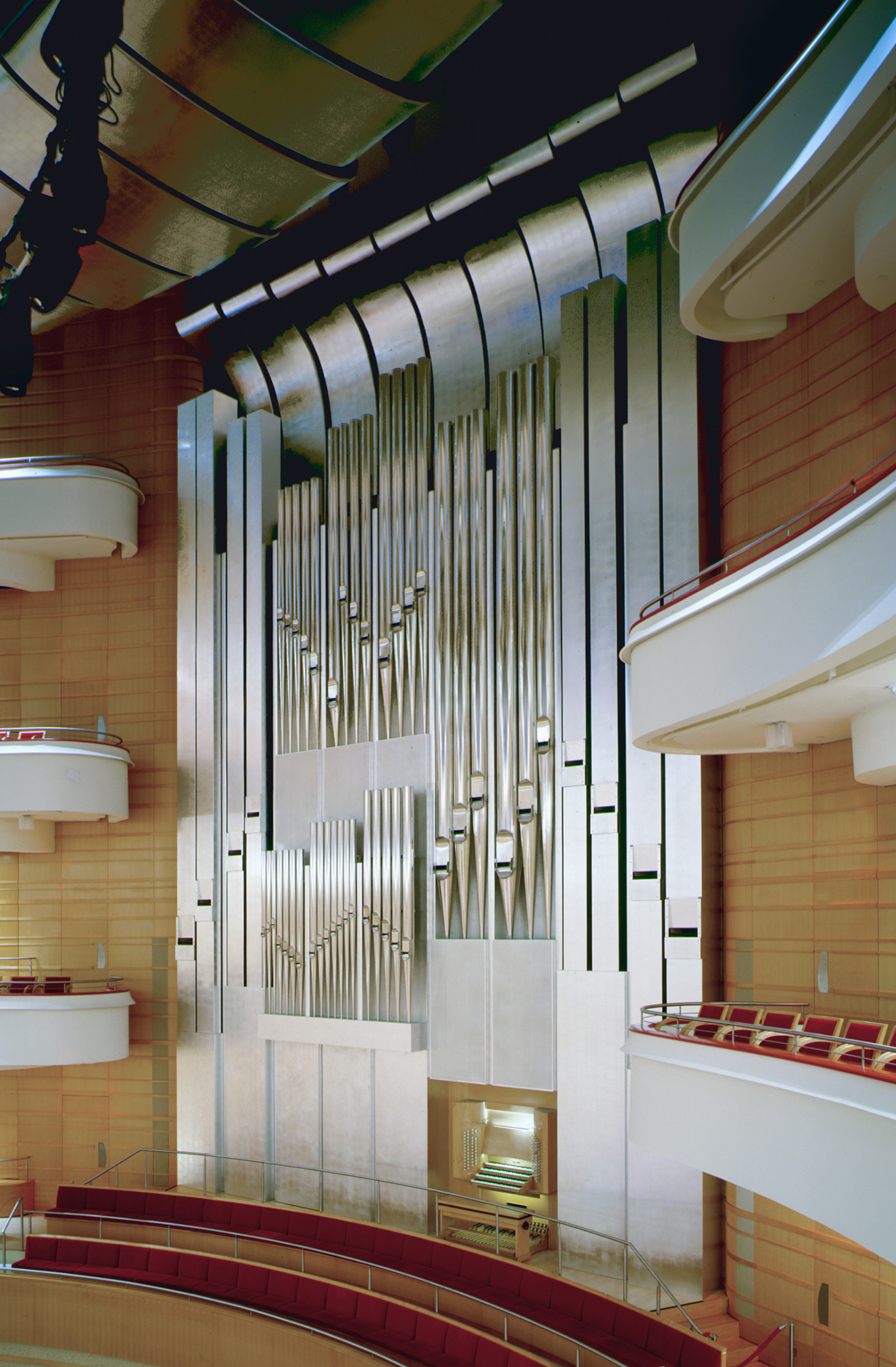