In the autumn of 1989 we were approached by the San Luis Obispo Performing Arts Center soliciting our interest in building a new instrument for their proposed concert hall on the campus of California Polytechnic State University.   We were subsequently selected as the builder of choice, and worked productively with architect Alberto Bertoldi to ensure that the organ would integrate into the design of the building. Due to unexpected costs in the construction of the building it was twelve years later that the Foundation for the Performing Arts Center signed a contract with us to design and build their new instrument.  By then, Harman Hall in the Christopher Cohan Performing Arts Center had been completed and was receiving rave reviews from the international press for its graceful, bold design and its warm, clear acoustics.

The organ owes its existence to the vision and munificence of Bert and Candee Forbes of San Luis Obispo.  Thanks to their generous gift to the Foundation, the organ became a reality and the specification was enlarged from two to three manuals.  As the visual design evolved, it became clear that larger pipes than 16’ were needed in the visible array, and the Forbes’ additional gift made it possible to place pipes of the 32’ Prestant of burnished tin in the façade—giving the organ the visual and aural impact that a concert hall of this stature deserves.

The organ is housed in a freestanding case built into an elevated niche located just to the left of the proscenium opening.  The Great and Pedal divisions were placed just above the main impost level, the Positive over the Great trebles, and the Swell in the location we prefer at the top center of the case.  The large Pedal offsets are located at the rear of the case, with the wooden Haskells of the Prestant 32’ just beyond the right case wall. In addition to the burnished tin pipes of the Pedal Prestant 32′, the Great Prestant 16’, and the Positive Prestant 8′ occupy the façade. The largest pipe visible pipe is 32’ GG.

Hidden from sight above the auditorium’s apparent ceiling are two-foot-thick concrete walls and a 400-ton concrete deck. Together they conserve the sound energy of music, speech, and even the organ’s deepest bass sonorities with great efficiency, and they isolate the interior of the concert chamber from exterior noise.  In addition, the building’s mechanical systems are flawlessly isolated so as not to intrude on the listening experience, allowing the audience to perceive the finest nuances of speech and music. The acoustical consultants for the hall were Kirkegaard Associates, Lawrence Kirkegaard, Principal, with Edward McCue, Project Acoustician. 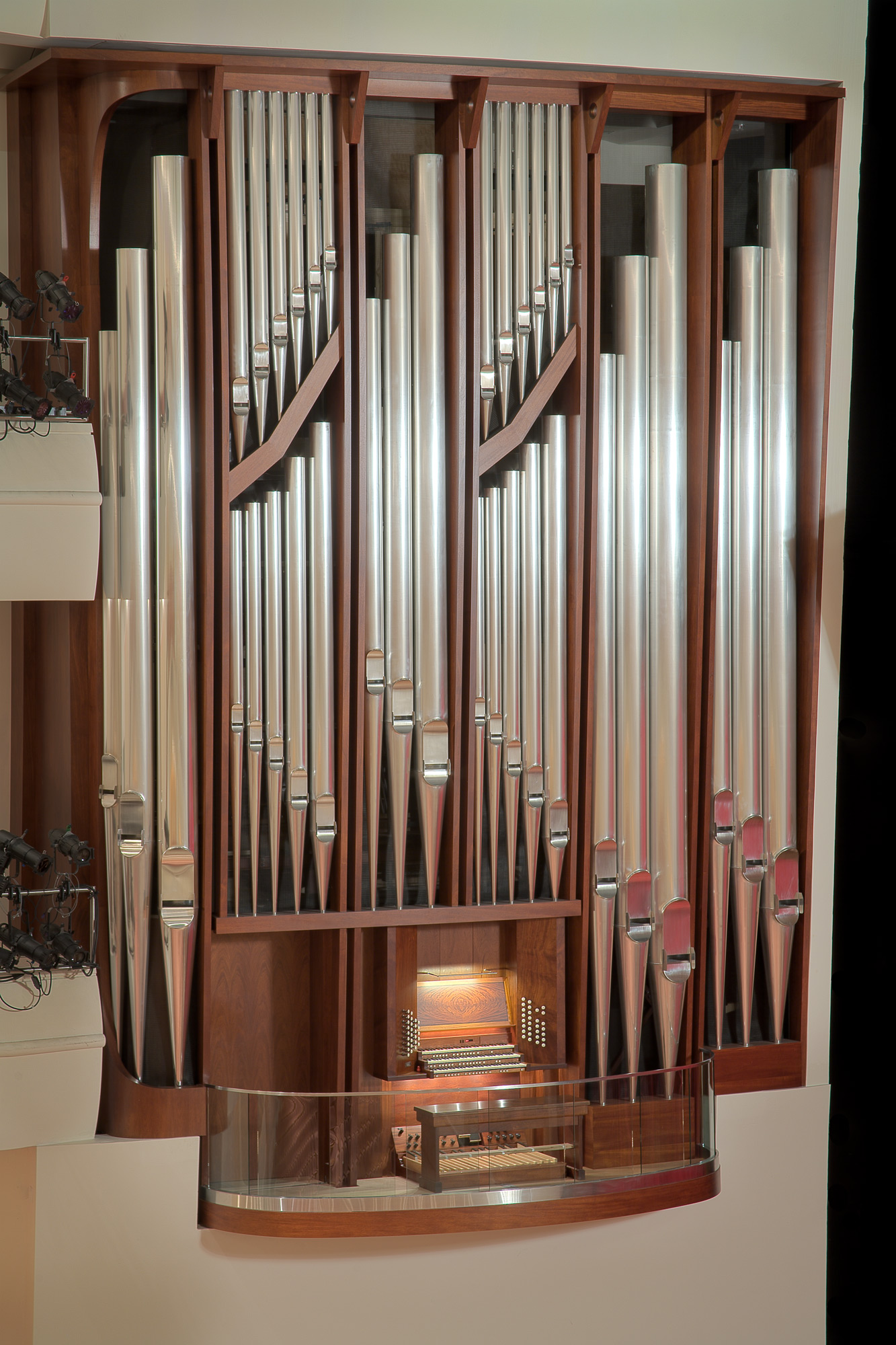