Shepherd of the Hills Lutheran Church

A May 2004 inauguration marked the fulfillment of a project that had begun fully a decade before. The need for a larger church to serve the growing parish north of St. Paul became apparent in the early 1990s. By 1994 a new church design had been conceived and was to include an organ. An informed task force of parishioners visited many instruments throughout the Twin Cities area including Charles Fisk’s magnum opus at House of Hope Church in St. Paul, Opus 78.  Based on this experience, the committee unanimously recommended that the new instrument be ordered from our workshop.

Funding for Opus 122 came from many parishioners who gave in different ways.  Some gave memorials dedicated to loved ones, others made one-time gifts or weekly pledges, children gave nickels and dimes. All told, the gifts of the church came from the full spectrum of its membership. The people of Shepherd of the Hills Church are thus intimately connected with Opus 122 through their generosity and commitment to the cause of having a fine pipe organ.

The two-manual, twenty-two-stop organ speaks over the length of the modern rectangular amphitheater church.  Maple, used in the pews and furnishings of the church, also frames the dynamic asymmetrical organ case. The façade of Opus 122 is composed of the Contrebasse 16′, made of eastern white pine and located in the outer towers, and the Prestant 8′ of spotted metal in the center arrays. The two-manual console with mechanical key and stop action is attached at the left end of the organ to give the organist a direct view of the conductor and the sanctuary.  Opus 122’s stop list reflects the variety of roles it must serve in playing Lutheran liturgies, in ensemble work with choirs and instrumentalists, and as a solo instrument. 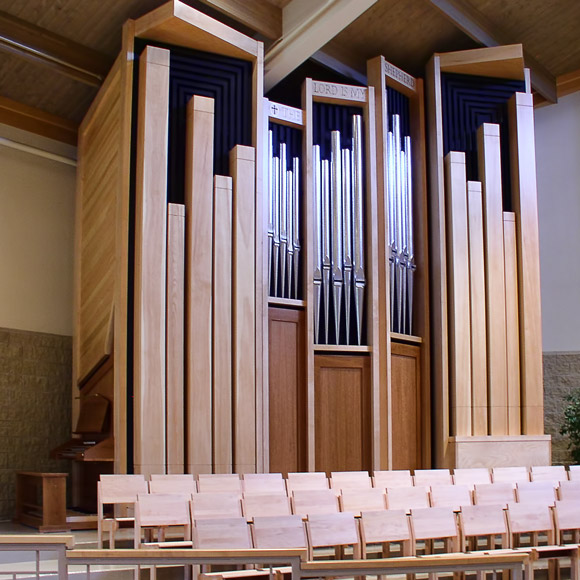 Swell to Great
Swell to Pedal
Great to Pedal