Named for Mabel Shaw Bridges, the 1915 ‘Little Bridges Hall’ was the work of Myron Hunt, a Massachusetts born-architect who worked with Louis Sullivan and Frank Lloyd Wright in Chicago before moving to California and designing the Huntington Estate, the US Supreme Court Building and the Rose Bowl.  His work at Pomona College resulted in a 600-seat concert hall incorporating elements of Mission and Spanish Renaissance revival styles. Fisk visual designer Charles Nazarian created a façade that fuses classical organ building principles with the hall’s fanciful interior. A composition of pilasters, cornices, and arches joins the casework seamlessly with Hunt’s rich, dark panels on the stage below. Visually connecting the organ with the ornate ceiling are trumpeting angels, shell motifs in the intermediate flats, and a medallion at the center, all carved by Gloucester sculptor Morgan Faulds Pike.

The organ is a memorial to Carrie Schitker Hill, given by her family. As with many of our installations, the Hill Memorial Organ depended heavily upon the collaboration of architect, acoustician, and organ builder. The Claremont Environmental Design Group was charged with the building restoration, and Dana Kirkegaard of Kirkegaard Acoustics, was asked to consult on acoustical improvements, not only for the sake of the organ, but also for the choruses, ensembles, and orchestras that make music in Little Bridges Hall.  The three firms found consensus in reshaping the walls at the sides and back of the organ to allow it to project its sound efficiently into the room, while maintaining the character of Hunt’s original design. Acoustical enhancements to the hall include honeycomb panels that stiffen the polychrome wooden ceiling, new inch-thick window glass, and acoustically favorable seating.

The specification of Opus 117 is distinctly eclectic. Created in consultation with Pomona College Organist Dr. William Peterson, its tonal design can be traced to the most celebrated traditions of organbuilding. From the very first discussions with Professor Peterson the organ’s role as a teaching instrument was clearly defined, as was its position as the principal recital instrument on campus. This organ has demonstrated a remarkable ability to showcase music of widely varied origins with ease and authenticity. The stop action is electric with a combination action including multiple memory levels and a sequencer. Winding to the manual divisions is from a single large wedge bellows to ensure a unity of breath. Wind pressures are 3¼” water column in the manuals, and 3¼” and 4¼” in the Pedal.  The organ is tuned in Fisk II, a modification of the mildly unequal temperament first developed by Charles Fisk in 1978.

Pomona College celebrated the dedication of Opus 117 in October of 2002 with a panel discussion, an exhibition of plans and drawings, and an inaugural concert played by Dr. Peterson. 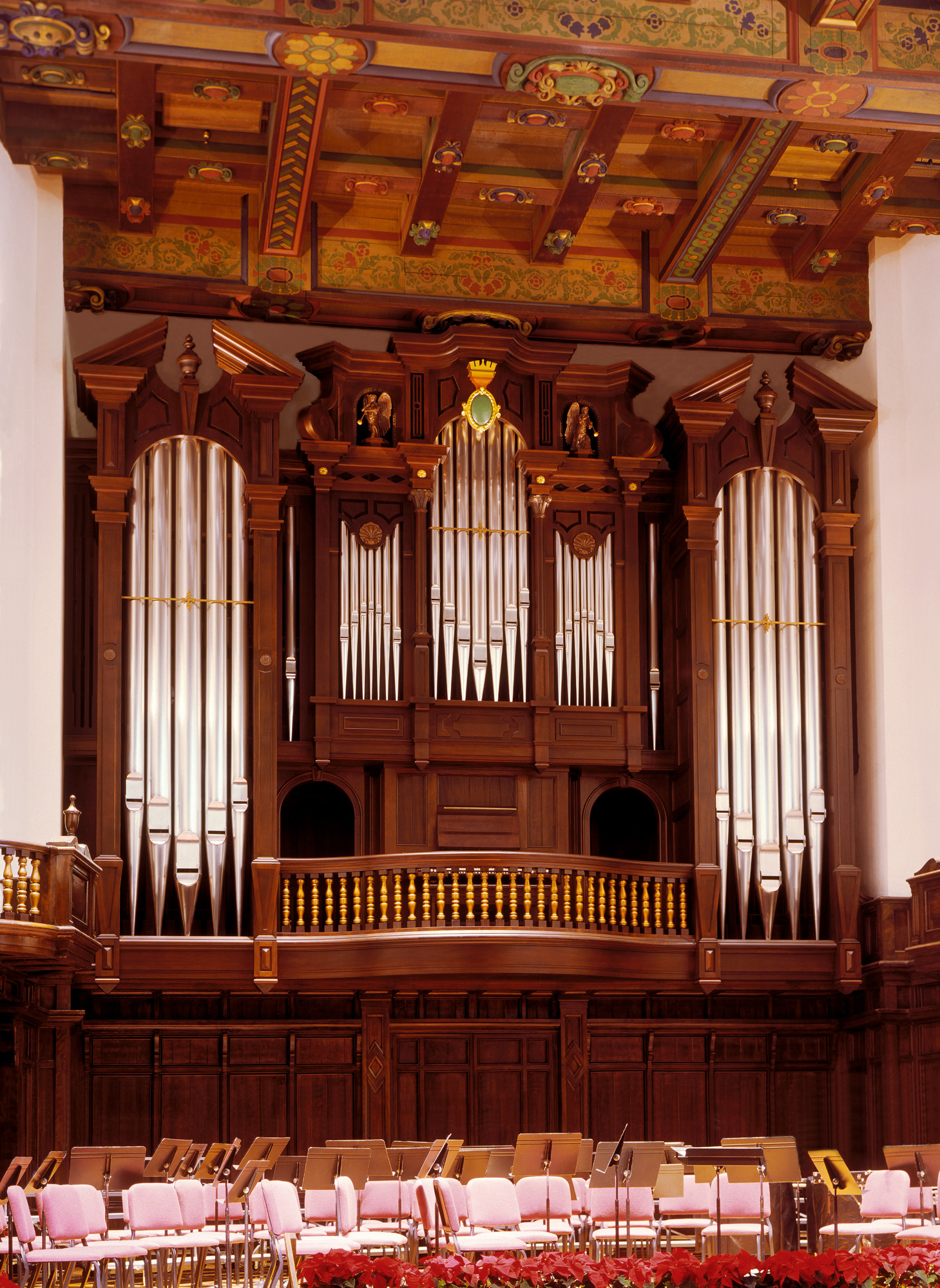