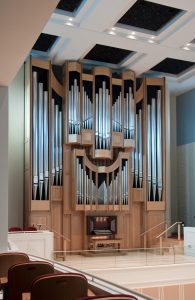 In 2006 we were given the extraordinary opportunity to build a new recital organ in Auer Hall for the students and faculty of the Jacobs School of Music. For the University, the commission signified a fresh start, eleven years earlier another organ builder had been contracted, but the project faced problems and delays and was ultimately abandoned before completion. We set about the planning and design for a new instrument with a thorough evaluation of the existing pipes, action and structure. Opus 135 includes less than half of the former organ’s pipework, now re-voiced. All of the key action, stop action, wind chests, expression boxes, and ducting are new. At the University’s request, the casework was retained, with a few alterations and a new internal structure.

Our analysis revealed that by moving the organ further up and back in its gallery, useful space could be gained for master classes and instrumentalists. Such a change required a complete reorganization of the divisions within the case, as well as accommodations and new structural support in Auer Hall itself. These changes created the opportunity for significant improvements in the room’s acoustic properties. With the advice of acoustician Dana Kirkegaard, walls were made more massive, diffusers were added in the ceiling coffers, and the panels surrounding the stage were replaced, resulting in a warmer, clearer, more bass-friendly sound; not just for the organ but to the benefit of the many voices and instruments that can be heard throughout the year in this busy concert hall. 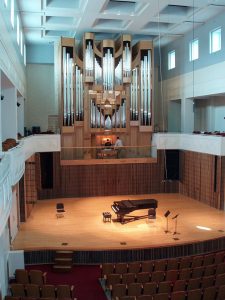 The stoplist, developed in collaboration with faculty members Chris Young and Janette Fishell, reflects the organ’s decidedly 19th century French character, as well as a level of eclecticism necessary for the authentic performance of a wide range of repertoire. Opus 135 also includes tonal elements that are conceived to support soloists and ensembles both large and small. There are three manual divisions, two of which are under expression, and a large Pedal division featuring two 32′ stops. The instrument showcases music of the Renaissance and Baroque eras admirably, yet it can effortlessly bring to life music of the French Romantic and Post-Romantic eras.

Our goal is a responsive, light, rugged and reliable mechanical action. To this end we use carbon fiber trackers in an action which is as direct as possible and engineered to minimize friction. Carbon fiber has inherently low mass, and negligible stretch, it is stiff, straight and stable in all climatic conditions. Careful attention to detail at each connection helps ensure that the organist’s intentions are transparently transmitted to the pipework.

The couplers in Op. 135 are mechanical, without electronics or magnets, and may be coupled to the Great division either directly or by way of the Kowalyshyn Servo-pneumatic Lever. The KSPL is like “power steering for the couplers.” It enhances the ease and versatility of playing by following the organist’s touch and pneumatically transmitting the player’s actual attack and release, reducing the workload in large registrations. In a departure from most tracker instruments, current Fisk couplers do not “couple through”, affording maximum versatility.

Reliability, Durability and Ease of Maintenance 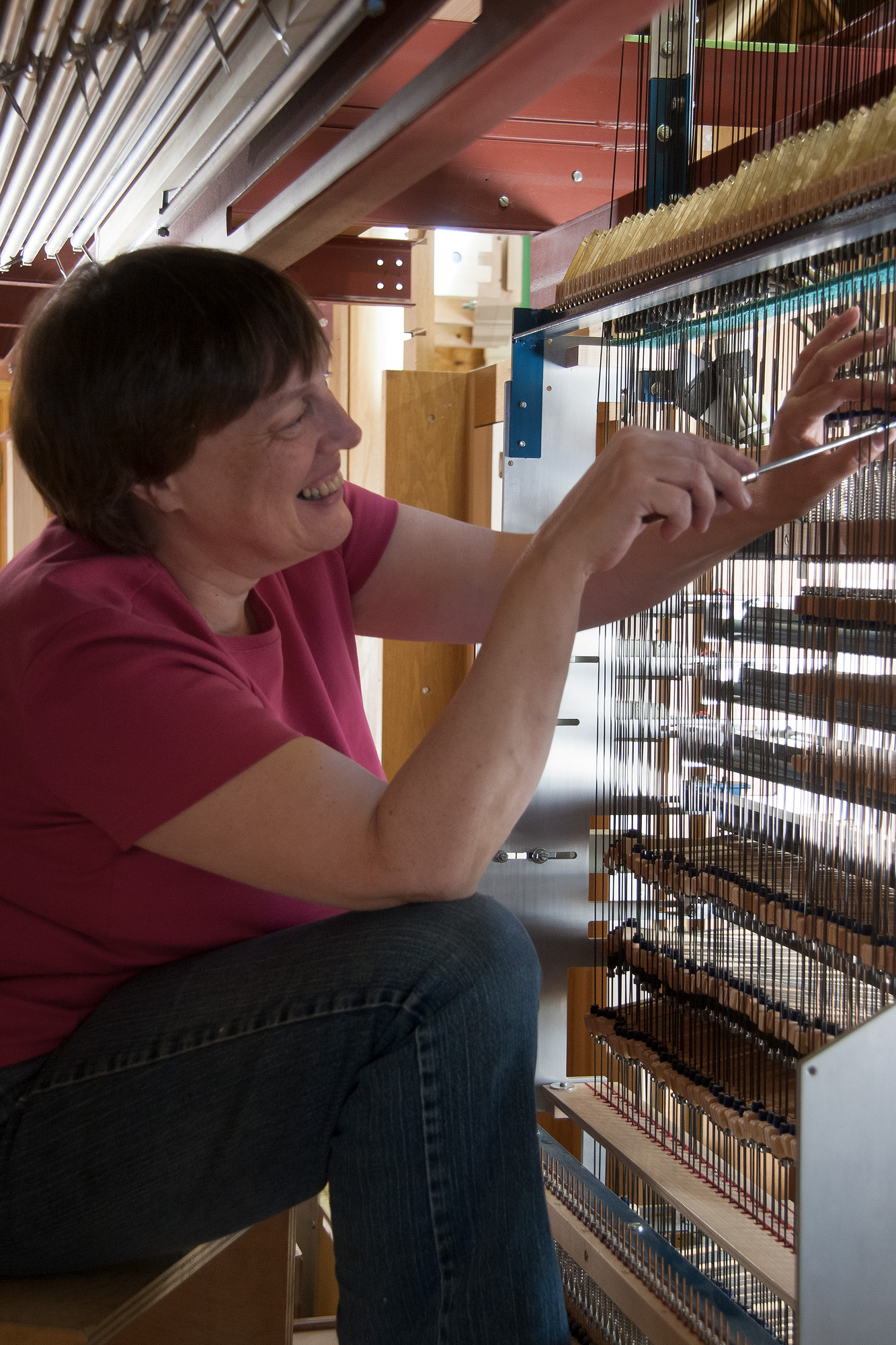 A recital organ in a conservatory setting must serve the demanding musical requirements of the faculty and students and must do so reliably. The Jacobs School of Music hosts the largest organ program in the country. On average 40-plus organists play Op. 135 as much as 70 hours a week. The organ is engineered to be self-adjusting, and only the most robust components are used. The internal layout reflects our recognition that pipework and actions must be accessible for efficient tuning and maintenance. Kowalyshyn Servo-pneumatic Levers have proven rugged and reliable, more than two dozen have been installed in Fisk instruments since 1990. Unlike complex and proprietary electronic systems from other firms, they are designed and manufactured using standard organ building techniques and materials. Any accomplished organ technician will be able to understand and maintain them in the future.

A practice console for Opus 135 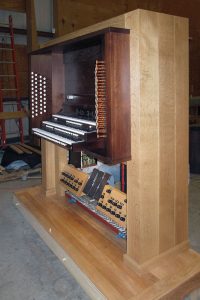 The Organ program at Indiana University is one of the largest in the country. Practice time is necessarily in high demand and apportioned among the Fisk and several smaller practice instruments. In further support of the program, a replica console was built to provide additional practice opportunity for students preparing music to play on the Fisk. This electric action console is paired with an existing, electro-pneumatic practice organ allowing students to gain familiarity with the recital organ’s console layout and afford more efficient scheduling.


“This organ is at the center of the department’s pedagogical and performance life. Reliability and artistic integrity were both goals of utmost importance in the commission of this magnificent instrument.”